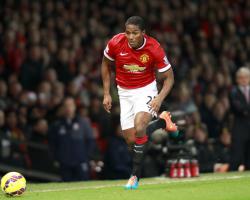 Louis van Gaal's side hold the final Champions League berth as they prepare for Saturday's home fixture against lowly Leicester, but they are just a point ahead of fifth-placed Arsenal.

The Gunners, on a four-match winning run, face Aston Villa at the Emirates Stadium on Sunday and Valencia knows the race is just starting to heat up.

"It's very open and quite tight in those top spots," Ecuador international Valencia said

"We're seven points behind second place and then a couple of teams are three or four points below us.

"We must fight hard in the remaining games to finish as high as possible.

"It's a long season and we've picked ourselves up of late, so we need to keep the results coming for the fans.

"We've got tough games coming up against very good teams and rivals for our position but, if we keep the concentration high, we can achieve our aim of a top-four finish."

United missed out on European football for the first time in 25 years when they finished seventh at the end of a campaign of struggle, largely overseen by previous manager David Moyes.

Despite a sluggish start to the season under van Gaal, Moyes' successor, United have put themselves in contention to end their season-long absence from continental competition with a run of one defeat in 13 matches.

Valencia believes new signings Angel Di Maria, Radamel Falcao and Marcos Rojo have settled well in to the United set up, despite each suffering injury problems in the first half of the campaign.

"Angel, Rojo and Falcao are terrific

They've all settled quickly into the group and I think they're all really enjoying life here," Valencia said.

"We've got a top bunch of lads

We all get along really well, the atmosphere is great but it's always been great here."

United were held to a disappointing goalless draw by League Two club Cambridge United in the FA Cup fourth round last Friday and van Gaal will hope his players are more incisive against Nigel Pearson's side, who are fighting for survival in the Premier League.

Wayne Rooney and Juan Mata are expected to be recalled to the United squad after being rested for the FA Cup match, while defender Jonny Evans remains a doubt after missing the match through injury.

Leicester manager Nigel Pearson admits he wants to sign further players before Monday's transfer deadline but is unsure whether they will materialise.

The bottom of the table Foxes have already signed Mark Schwarzer and Andrej Kramaric in January to aid their pursuit of Premier League survival.

"I don't know if we will see anymore," said Pearson

You're not getting nothing more from me.

"All that I think about is what we're trying to do, I'm not interested in other people

We have tried to do the business we wanted to.

"We got two done and if we can strengthen we will

But I don't know.

"It's nice to have options, we've managed to keep a relatively fit squad and hopefully that will continue

If we can add to that we will do."