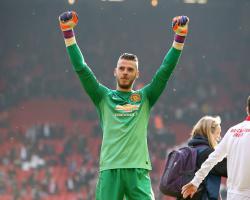 Two months after the Premier League season ended, one of the biggest transfer sagas of the summer is yet to end.

Madrid have made it clear they want De Gea and sources at Old Trafford admit a tentative bid was made for the goalkeeper by the Spanish giants earlier this summer.

But, the proposal was rejected and United are determined to play hard ball with Madrid president Florentino Perez over their star goalkeeper.

Press Association Sport understands United have all but given up hope of persuading De Gea to sign the new ÃÂ£200,000 a week deal that has been on the table since November last year.

But, they are in no rush to let their two-time player of they year depart either.

It is expected he will leave Old Trafford either this summer or next.

However, it is also understood that United have told Madrid they will only sell De Gea to Real in this window as part of a swap deal for defender Sergio Ramos.

United would prefer to let De Gea run down his contract than sell him for a cash offer of around ÃÂ£25million.

With a bumper TV deal soon to kick in, and the cash from their huge kit deal with adidas, United are not short of money.

Sources at the club admit they have also become irritated by the suggestion that they have to sell De Gea because of Madrid's status as a football super power.

Senior figures at Old Trafford want the club to be "slugging it out" with Madrid for the best players in world football - and they believe they have the financial muscle to do so.

The feeling at Old Trafford is that Real Madrid's financial power is in decline.

The deal for Spanish TV rights is a fraction of the English equivalent and will remain that way for the next six years.

United have also noted that Real have tied several senior players down to long-term contracts, which has come at an enormous cost to the 10-time European champions.

United boss Louis van Gaal is said to be "relaxed" about the De Gea situation, mainly because he has a contingency plan in place if the Spaniard leaves.

Ajax goalkeeper Jasper Cillessen has been lined up as a replacement if De Gea goes this summer and United have entered talks with free-agent Sergio Romero, who they hope will replace the unwanted Victor Valdes.

Valdes has been linked with a move to Valencia, but such is his love for Barcelona that he is likely to avoid a return to Spain

Turkish club Antalyaspor are interested in the 33-year-old, who was being considered as a potential replacement for De Gea until he apparently refused to play for the reserves towards the end of last season.

De Gea is due to play in the first game of United's pre-season tour of the United States in the early hours of Saturday morning in Seattle.

Despite signing four new players, the spending at Old Trafford has not stopped yet, according to Van Gaal.

"We are not finished yet, I think," the United boss told MUTV.

"We need a balance in the selection and I think we still need to improve at least two positions and we shall do that when it is possible.

And, of course, that is in the eyes of our staff, but I have to have confidence that he can cope with the rhythm of the Premier League."