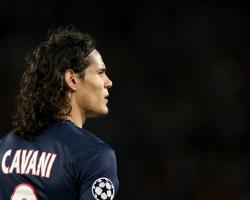 Cavani is at the top of Louis van Gaal's wish list as he looks to fill the void left by compatriot van Persie, who is expected to be officially unveiled in Turkey today after flying out from Manchester with his wife and children on Sunday afternoon.

The departure of van Persie leaves just Wayne Rooney and 19-year-old James Wilson as senior strikers in United's squad, with the Red Devils opting not to sign Radamel Falcao on a permanent deal at the end of last season.

And the Guardian are now reporting that van Gaal views Uruguay international Cavani as the perfect van Persie replacement.

British record signing Angel Di Maria could be used a makeweight in any potential deal, after failing to bring his Real Madrid form to the Premier League last season

Although fans would like to see Di Maria given another season to prove he was worth the ÃÂ£59.7m United paid for his services.

United have time on their side though, with well over a month left of the summer transfer window, new signing Memphis Depay will also help soften the blow of losing two experienced senior strikers in one summer.

Van Gaal stated last week that one of the reasons United brought Depay to England was because of his versatility as a forward, demonstrated by van Gaal at last summers World Cup, in which he played Depay as as striker.