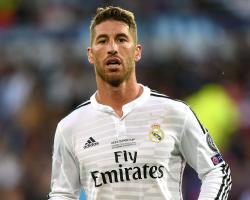 Ramos is tied to Real for another two seasons but has not been offered a contract extension.

The Spanish press claim that the 29-year-old defender is keen to leave Real after 10 years at the club, with Manchester the likely destination for the World Cup winner and two-time European champion.

When asked about Ramos, Benitez said to Marca: "I spoke to him regarding his future, his ideas and our ideas during this summer and when we started training in Madrid

"We have not spoken again about it

"I see the future with Sergio because he is a key player.

"I believe (Real president Florentino Perez) has said, perhaps not publicly but I have read it somewhere, that Ramos will continue and that he will remain here.

"If that happens, I will be the happiest man in the world because he is a great professional, a great player."

Ramos is expected to be named Real's next captain following the departure of Iker Casillas to Porto last weekend.

"It has been a great satisfaction to see how he applies himself in training and works every day," Benitez said

"With the commitment and motivation that I see in him, I believe he can be a great captain."

Ramos is currently training in Melbourne, Australia, with the Spanish giants as part of their summer tour