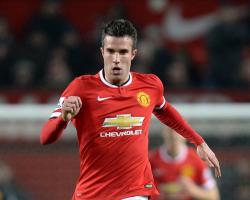 Van Persie flew to Turkey on Sunday before completing a medical the following day and then agreeing terms on a three-year contract.

The 31-year-old then appeared at a grand unveiling ceremony at the Sukru Saracoglu Stadium in Istanbul on Tuesday.

Thousands of fans gathered outside Fenerbahce's stadium to welcome the striker and the player spoke of his delight at joining the club, but Press Association Sport understands the deal has not been completed yet as both teams have yet to agree a fee.

United do not expect to receive a big sum for the Dutchman given that he turns 32 in three weeks' time.

A figure of around ÃÂ£5million has been mooted for the forward, who scored just 10 goals for the club last term.

United are on the lookout for a replacement for Van Persie

Paris St Germain's Edinson Cavani is on their radar and the club retain an interest in Tottenham striker Harry Kane, even though they realise it will be extremely difficult to prise him away from White Hart Lane.

Robert Lewandowski has also been linked with a move to Old Trafford but the striker's agent insists it would cost at least 50 million euro (ÃÂ£35million) to persuade Bayern Munich to sell his client.

Currently the only fit senior striker that manager Louis van Gaal has at his disposal for the pre-season tour of the United States is Wayne Rooney.

James Wilson, 19, is viewed as a bright prospect, but has yet to prove he is worthy of a regular first-team place.

Javier Hernandez is not in the squad as he is suffering from a shoulder injury, but it would not come as a surprise if he stayed at the club beyond the end of the transfer window even though he was loaned to Real Madrid last season.

United kick off their four-match pre-season tour with a game against Mexican side Club America in Seattle in the early hours of Saturday morning before flying to San Jose, where they will play San Jose Earthquakes and Barcelona

The two-and-a-half week tour ends with a match in Chicago against Paris St Germain.