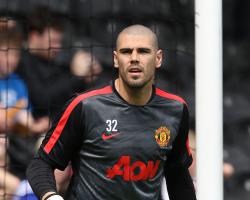 Van Gaal handed Valdes a lifeline in January when he gave him an 18-month deal following a serious knee injury.

The 33-year-old had been tipped to replace David de Gea if he left for Real Madrid, but Van Gaal has revealed the three-time Champions League winner will now be sold.

Van Gaal and Valdes share a long history, but the Dutchman has been ruthless with the goalkeeper because he claims he refused to play in United's second string sometime last season.

When asked why Valdes had been left out of the squad for United's pre-season tour of the United States, Van Gaal said: "He is not selected because he does not follow our philosophy.

"When that is the case, there is not a place for a player.

"Last season, he refused to play in the second team and there are other aspects you need as a keeper at United.

"When you are not willing to follow those principles, there is only one way and that is out."

The United boss handed him his Barca debut in 2002 and the Spaniard cited the presence of Van Gaal as one of the main reasons why he decided to join United in January.

But Valdes only played twice for the Red Devils last season - against Arsenal and Hull, when De Gea was injured.

And it seems he will not play for United again.

"It is a big disappointment, we thought that he would follow our philosophy," Van Gaal said.

"It is a pity because we have given him the opportunity to rehabilitate, gave him a contract and then he is fit to play.

"If you do not play in the first team, our philosophy is to play in the second team and he did not do that."

Valdes did play three games for United's second string, but it seems he told Van Gaal towards the end of the campaign that he would not be doing so again.

United have started planning for life without the former Barcelona stopper, who has been linked with Valencia and Antalyaspor.

They are interested in signing Argentinian free agent Sergio Romero.

On this tour, Sam Johnstone and Anders Lindegaard will provide back up for De Gea, who has been heavily linked with a move to Real.

The Spanish giants would like to sign the goalkeeper this summer, but they have so far refused to meet United's asking price for the player and senior sources at the club feel the 24-year-old may start the season at Old Trafford.

Van Gaal became irritated when asked about how De Gea had responded to being named in the 26-man party for the four-game tour of the US.

"His attitude is fantastic and I have said that already," Van Gaal said.

"It is stupid to keep asking about his attitude."

United begin their tour with a friendly in the International Champions Cup against Mexican side Club America in the early hours of Saturday morning in Seattle.

Angel di Maria and Javier Hernandez have been left out of the 26-man party due to their international commitments earlier this summer, but Van Gaal revealed the duo will join up with the squad in San Jose a week on Saturday ahead of the final game of the tour against Paris St Germain.

Di Maria has been linked with a move to the French club, and Van Gaal did little to play down reports that the ÃÂ£59.7million midfielder wants to leave.

"We shall see," he said when asked whether Di Maria would stay.

"In football, it is a process

It's a process for Di Maria and Man Utd

"But he is still a member of United and he said he will come out on July 25."

Hernandez, who is recovering from a shoulder injury sustained on international duty, spent last season on loan at Real Madrid, but will be return to fight for a first-team place this year, it seems.

Explaining his decision to loan Hernandez to Madrid last year, Van Gaal said: "I made the decision to let (Danny) Welbeck and Chicharito (Hernandez) go

At the end of August, we also bought (Radamel) Falcao.

"When you play a system with two strikers, you have to let players go, but Chicharito is coming back."

Valdes later Tweeted what appeared to be a response questioning Van Gaal's comments.

Three of the pictures referenced Under-21 matches he played for United against Liverpool, Chelsea and Tottenham last season, while the fourth was a photo of him alongside U21 team-mates in the dressing room.