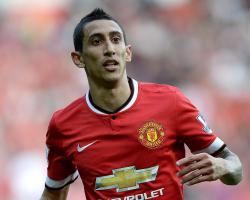 The 27-year-old spent a large chunk of the second half of the season on the bench at United and he has subsequently been linked with a big-money move to PSG.

Di Maria is currently on leave after his exertions with Argentina at the Copa America, but Van Gaal insists the midfielder will fly to the US on Saturday, as had been originally planned before the tour started.

"He will come on July 25," the United manager said.

"I cannot answer that," the Dutchman said.

"It is a process

When we think we have to say something, we will."

Di Maria has also encountered problems off the field since his move to England.

He and his family moved out of their Cheshire home in February following an attempted burglary.

Senior sources at United recently downplayed suggestions Di Maria was unsettled in Manchester, but that has not stopped cash-rich PSG from being linked with a move for the player.

As well as Di Maria, Marcos Rojo and Javier Hernandez are also expected to join the squad on Saturday, when United play their third tour match - against Barcelona at the Levi's Stadium in California.

The trio are not expected to play in the match against Barcelona but will be available for United's last match - against PSG - which could prove interesting if Van Gaal selects Di Maria.

Barcelona's Pedro is in the frame as a potential new recruit if Van Gaal decides to cut his losses on Di Maria.

The Dutchman had hinted he was ready to sign a "surprise" striker at the weekend.

But Van Gaal had changed his tune somewhat after United had beaten San Jose Earthquakes 3-1.

"I don't know if I want to buy a striker," Van Gaal said.

That is not what I said

You are saying that

I mean something else."

Memphis Depay scored his first goal for United while Juan Mata and Andreas Pereira also found the net in San Jose, but Van Gaal was not a happy man after the final whistle.

"The first half, I was satisfied," said Van Gaal, who made 10 changes at half-time.

"But the second half I think we played very badly

A lot of unnecessary ball losses

The only highlight was the goal from Pereira."

Midfielder Bastian Schweinsteiger was singled out for criticism.

"He was also bad," Van Gaal said of the ÃÂ£15million signing.

"The one highlight was Pereira."

Goalkeeper David de Gea, who sat out the first game in Seattle against Club America, did not play against San Jose.

The Real Madrid target warmed up prior to the match, but he did not come off the bench at half-time and Sam Johnstone remained in goal for the whole 90 minutes..

Van Gaal hopes the Spaniard will be fit to play against Barcelona in Santa Clara this weekend.

"I have good hope that he can play against Barcelona," Van Gaal said.

"He was still injured

It was difficult, so I said, 'Go stand in the goal so we had a point of direction for my attackers, but don't do anything to risk your injury more'.

"I hope that he can play on Saturday

I think he can play on Saturday."