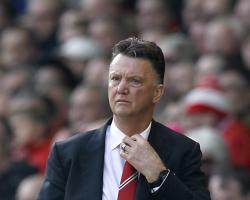 One of the reasons why Ferguson was so successful at United was because of his ability to cold-heartedly dump the players he deemed surplus to requirements.

The likes of Roy Keane, David Beckham, Jaap Stam, and Ruud van Nistelrooy were all discarded when the Scot decided they were not good enough or lacked the discipline and commitment he demanded.

Van Gaal has headed down a similar route, selling Van Persie to Fenerbahce just 12 months after he was Holland captain under the former Barcelona coach.

The United boss released former loanee Falcao after a poor season and last week announced that Valdes, the goalkeeper he gave his Barcelona debut to 13 years ago, would be sold after apparently refusing to play for the reserves last term.

"Louis van Gaal has been very successful in his career

He has been a bit ruthless with a few of his decisions lately and that is what good managers do.

"At certain stages, managers have to make major decisions and sometimes people have to move on and the manager has got to change things the way he sees it

And that is what he is doing, that's part of his job - you have to be ruthless at stages.

"With Valdes, it didn't suit the manager, so he has moved him on."

Valdes has been left out of United's squad for their pre-season tour of the United States and Turkish club Antalyaspor are interested in the goalkeeper's services.

Memphis Depay, Morgan Schneiderlin and Matteo Darmian have all joined the club, but the biggest coup for Robson is the capture of Bastian Schweinsteiger from Bayern Munich.

The midfielder's experience, leadership qualities, and ball skills make him an outstanding player in Robson's eyes.

"I have always admired him

He has outstanding quality, he can be a big influence at Manchester United this year," the former United captain said at a Special Olympics event organised by AON in the US.

His dogged determination, as shown when he carried on playing in the World Cup final last summer after receiving a nasty cut under the eye, also sets Schweinsteiger apart from his peers, according to Robson.

"I like his attitude," the former United midfielder said.

"In the World Cup final someone made a real bad tackle on him and he got up and the next minute someone hit him in the face, he was bleeding, but he wasn't rolling about

He just got up, got treatment and got on with the game.

"He is not just one of these players that falls down, and rolls over the place.

"He is a really good character so for someone like myself it's great to see him in our squad."

Schweinsteiger and the rest of his team-mates flew to San Jose from Seattle on Monday to begin the second leg of United's tour of the United States.

United, who beat Club America in their tour opener on Saturday, take on San Jose Earthquakes at the Avaya Stadium in the early hours of Wednesday morning before playing Barcelona in the Levi's Stadium in Santa Clara on Saturday.

Van Gaal's men then round off their tour with a friendly against Paris St Germain in Chicago on June 30.