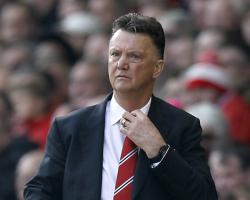 The Dutchman has restored an air of grandeur at the club since his arrival and after a successful first year in charge, United are now back in the Champions League.

Van Gaal is enjoying his time in Manchester, but the 63-year-old has promised his wife Truus that this will be his last job in management and he intends to stick to his word.

"I promised that to my wife

We have not many years together any more

That is the reason.

"I have to admit I have said to her, when I met her and after our relationship seemed to be very good, that at 55 I shall quit

There is another reason why Van Gaal is adamant he will walk away from the game that has consumed his life for the last 43 years.

After experiencing success with the likes of Barcelona, Bayern Munich and Ajax, the Dutchman feels he has tested himself in the most challenging leagues in the world.

Not even huge riches could persuade him to seek another contract at Old Trafford or elsewhere.

"I have done everything in my career as a manager

"I participated in the World Cup and the European Championship too.

"The only wish was the Premier League

Now I am here.

"Do I have to go to Qatar to earn still more money? I don't think so.

"You have to enjoy also your life and your relationship with your wife."

The only box Van Gaal is yet to tick on his to-do list is to win the Barclays Premier League.

"If it is this year, then I am very happy

But I cannot say this year we shall be the champions.

"We have to fight for it

That is the most important thing

Until the end we have to challenge for the number one

And maybe we are.

"The long-term vision is to win the championship or an FA Cup or a Champions League."

One man who knows a thing or two about winning such competitions is Sir Alex Ferguson.

United's most successful manager has been giving Van Gaal advice during the second leg of the club's tour of the United States in San Jose.

Van Gaal insists he has no problem with Ferguson being around during the tour and welcomes his advice.

I talk with him very many times," Van Gaal said.

He is sitting in the board, so he has to judge on me

But there is nobody in this world who can push me more than myself."

Van Gaal dismissed claims that he is breaking with United's traditions by spending vast amounts of money on new players.

The former Holland coach insists he is committed to the idea of bringing youth players through the ranks at Old Trafford.

When the Arsenal manager's words were put to Van Gaal, he pointed out that United ended their 3-1 friendly win over Barcelona on Saturday with a team whose average age was 22

"Y ou have seen the players (on Saturday) in the second half? I think that's very young," he said