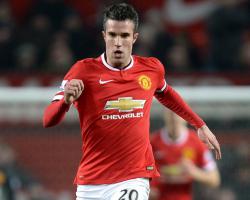 The Turkish giants announced on Thursday that they had entered into negotiations with United and the Dutch striker over a potential move and they have now revealed that he is due in Turkey on Sunday.

On the evening of Sunday July 12, he is coming to Istanbul," read a statement on their official website

While Fener seem confident that a deal will be completed shortly, United boss Louis van Gaal refused to confirm that the 31-year-old was on his way out of Old Trafford on Friday

Asked whether he was looking for a another striker because Van Persie was leaving, Van Gaal said: "When you say that it is not all true

We don't have the feeling yet."

His impact since then, however, has been muted due to a series of niggling injuries, and he was limited to 10 goals in 29 appearances under compatriot Van Gaal last season

If Van Persie is sold, United would have only Wayne Rooney, James Wilson and the injured Javier Hernandez - out with a broken collarbone - in their squad as recognised strikers following the exit of on-loan Falcao at the end of the season.