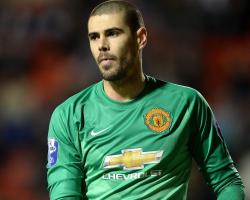 The 34-year-old is moving to the Belgian club on loan until the end of the season and will become a free agent in the summer.

A statement on the Red Devils' website said: "Manchester United and Standard Liege have reached agreement for the temporary transfer of goalkeeper Victor Valdes, effective until the end of the current season."

The former Barcelona goalkeeper has only made two appearances since joining United 12 months ago and has reportedly experienced a strained relationship with manager Louis van Gaal.

Valdes on Thursday sent a farewell message to his supporters, posting a message on Twitter above a picture of United's training ground saying: ''Thank you all for your support during these months of hard work for me

I will never forget! See you soon!''

He did not go on the summer tour to the United States and was not permitted to train with the first-team squad, and has not been given a shirt number this term

He becomes the fifth United player to go out on loan this month after fellow goalkeepers Sam Johnstone, Dean Henderson and Kieran O'Hara, and striker Ashley Fletcher.

Adnan Januzaj, Will Keane, Donald Love and Joel Castro Pereira have all returned to the club in recent weeks, while Liam Grimshaw and Ben Pearson have both made permanent moves to Preston.