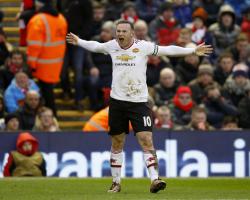 While Rooney was the match-winner with the visitors' only shot on target, David de Gea was the man who made the 1-0 win possible with a string of saves and was the far busier of the two goalkeepers.

It was just Rooney's sixth goal in 24 appearances for both Everton and United against Liverpool and his first at Anfield for 11 years but it edged him to within seven of Sir Bobby Charlton's club record of 249 and lifted his side back up to fifth, two points behind Tottenham.

Louis van Gaal's tactics may have been criticised as boring - and one shot on target in 90 minutes hardly did much to alter that - but he will see them as fully justified after leaving Merseyside with all three points.

The game was a reflection of the two clubs' current fortunes; both trying to rediscover their identities under foreign managers and generally struggling for quality, especially in the final third.

There was also a lack of the ferocity for which this clash of north-west arch-rivals is known.

In the corresponding fixture last season a fired-up Steven Gerrard was sent off less than a minute after coming on at half-time; the highest temperatures rose on a chilly Merseyside afternoon was the confrontation sparked by Lucas Leiva's insistence that Maroune Fellaini had stamped on him off the ball.

Both were involved in dramatic 3-3 draws in midweek and although it was too much to hope for a repeat, the standard of finishing on display never suggested it would come remotely close.

The hosts dominated but in the opening 45 minutes managed just one effort on target and that was a tame attempt from Adam Lallana who having been given a run on goal from Lucas' ball over the top directed a downward header straight at De Gea with Roberto Firmino firing the rebound wide.

James Milner and Jordan Henderson also failed to trouble the United goalkeeper, with the latter's volley coming from the best move of the half involving some intricate play by the Reds captain, Lallana and Firmino.

United, who had to replace the injured Ashley Young with 18-year-old Cameron Borthwick-Jackson just before the break, failed to test Simon Mignolet - which was unforgivable considering the errors the Belgium international has been forced into this season.

Liverpool continued to play with the initiative in the second half with De Gea twice denying Emre Can, once with a brilliant save with the Spain international recovering quickly to prevent Firmino scoring the rebound

Henderson made the United keeper's job easy for him by planting Firmino's cut-back straight into his arms.

United could have snatched the lead when Anthony Martial flashed an angled shot wide of the far post but, after Mamadou Sakho had headed over another chance, the visitors delivered the sucker punch.

Liverpool's fallibility at set-pieces is becoming as much a part of the club's history as five European Cups and 18 league titles and it was their undoing once again 12 minutes from time.

From a short corner substitute Juan Mata's cross was headed against the crossbar by Fellaini and Rooney reacted quickest to smash home.

Liverpool manager Jurgen Klopp acted immediately, replacing centre-back Kolo Toure with striker Christian Benteke and later sending on newly-signed defender Steven Caulker to play up front for the second match running but it could not patch up the second of his side's two obvious problems.

While striker Daniel Sturridge is still recovering from a hamstring injury sustained in early December the Reds are toothless in attack and until that - and the aerial weakness at the back are addressed there will be more results like this.

Wayne Rooney was delighted to score the winning goal, taking his Manchester United tally in the Premier League to 176 - more than any player has managed for one club.

"I think everyone knows the importance of this game, regardless of positions," he told Sky Sports.

"It is a massive game for both football clubs, for the fans and it was a great victory

It's a massive victory for us.

"Obviously it's great to have records but I don't think that'll beat the feeling I've got now.

"I scored the winning goal at Anfield it has been a long time since that happened for me - my first year at United - so I will be a bit selfish today and enjoy that more than most."

Rooney's goal proved decisive but goalkeeper David de Gea was named man of the match after a fine display.

"They had some chance but we defended really well," he said

"After that, Wayne scored a fantastic goal and we beat Liverpool.

That is what we want."