​1971 proved to be an interesting year in England, with the likes of T. Rex, George Harrison and a Celtic-loving Rob Stewart topping the singles chart, while the year also marked when the United Kingdom and Ireland decimalised their currencies (exciting times I know).

In footballing terms however, the year was also the last time that six English sides reached the quarter-finals of European club competitions - a feat not equalled in the 48 years that followed, until the 2018/19 campaign. The efforts of ​Tottenham, ​Manchester United, ​Manchester City and ​Liverpool in the Champions League, and ​Chelsea and ​Arsenal in the Europa League, means that for the first time since 1971, England has six representatives in the quarter-finals of major European competition.

Ahead of their eagerly-anticipated ties, we take a look at how the previous crop of teams fared 48 years ago.

England's sole representative during the 1970/71 edition of European football's biggest club competition was in fact Everton, after winning the First Division under Harry Catterick in 1969/70 - the club's seventh league title at the time.

The reward for the Toffees following their league triumph was a first round draw against Icelandic side Keflavik, which they came through with relative ease, with Alan Ball's hat-trick at Goodison Park helping Everton to a 6-2 win in the first-leg, before securing a 3-0 victory in the second-leg to advance with a 9-2 aggregate win.

German champions Borussia Monchengladbach - who were in the midst of their most successful period in their history - awaited Everton in the second round, which was hotly contested over both legs, which both finished 1-1. A penalty shootout decided who would advance to the quarter-finals, and despite an unsuccessful effort from Joe Royle, Ball, John Morrissey, Howard Kendall and Alexander 'Sandy' Brown converted their penalties to record a 4-3 shootout win.

The quarter-finals however proved to be Everton's stumbling block, as the Toffees were knocked out by that season's runners-up Panathinaikos. Antonis Antoniadis - that season's top scorer in the competition with ten goals - gave the Greek side the lead in the first-leg at Goodison Park, before Andrew Johnson levelled for the hosts. However, a goalless draw in Greece meant Catterick's side saw their European adventure come to an end due to the away goals rule.

In what was its final season being called the Inter-Cities Fairs Cup, before being replaced by the UEFA Cup the following campaign, which later became the Europa League we know today, last season's winners Arsenal, Liverpool and Leeds United were flying the flag for England.

Despite being the reigning champions, the Gunners would be the first English team to be knocked out of the competition, at the quarter-final stage. After overcoming SS Lazio, Austrian side SK Sturm Graz and Belgian outfit K.S.K. Beveren, Arsenal lost their crown to German side FC Koln in the quarter-finals on away goals, after the tie finishing 2-2 on aggregate.

ON THIS DAY: 1971. #lufc lifted the Inter Cities Fairs Cup at Elland Road after beating Juventus on away goals. pic.twitter.com/cnAAi8l1Q9

The final two English representatives that season in European competition were Manchester City and Chelsea, with the pair competing in the Cup Winners' Cup.

City were in the competition as defending champions, while the Blues qualified for the competition following their FA Cup triumph in 1970, and both teams found success in that year's competition as they reached the semi-final stage, before being drawn against one another. 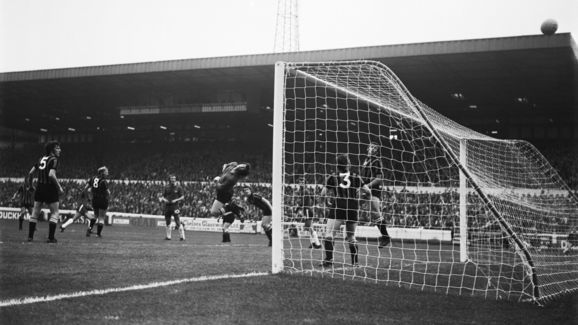 On that occasion it would be Chelsea that had the edge, knocking the defending champions out in the process with a 2-0 aggregate win, winning both legs by a solitary goal.

Their reward for knocking out the holders was a final against Real Madrid, which had to be replayed following a 1-1 draw in the initial final. Chelsea however overcame the Spanish giants in the replay, as goals from John Dempsey and Peter Osgood - who scored in the first meeting - helped the Blues to a 2-1 victory over Los Blancos in Greece.

Regarding the Champions League, there's a guarantee that at least one English club will reach the semi-final after Tottenham were drawn to play Manchester City in the quarter-finals,

Liverpool have been handed a favourable draw to reach the semi-finals, on paper at least, with them set to play FC Porto, while Manchester United face Barcelona, with there being the chance of England's two most successful clubs facing off in the semi-finals should they win their quarter-final clashes.

In terms of the Europa League, Arsenal have a tough task ahead of themselves after being drawn against Napoli in the quarter-finals, while Chelsea are set to face Slavia Prague , who knocked out serial Europa League winners in the last 16 and shouldn't be overlooked, although the Blues' record in the competition stands them in good stead, having won it in their only previous appearance in 2013.

While there's plenty of football to be played between now and both finals, the stroll down memory lane highlights the magnitude of the feat achieved by the ​Premier League's top six this season.

The last time the Europa League (or UEFA Cup) and Champions League (or European Cup) were both won by an English side was back in 1984 (Tottenham and Liverpool).