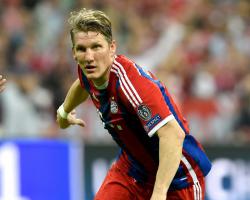 Bayern had made clear their desire to keep the 30-year-old World Cup winner, who has spent his entire career with the club to date, but said they would not stand in his way if he wanted to leave.

In comments reported on the Bayern website, Rummenigge said he met with Schweinsteiger on Friday and the midfielder said he had decided to go.

"We have responded to this request," Rummenigge said

"My colleague from Manchester United has contacted me

We have agreed on a transfer."

Rummenigge added: "We tried to convince him to stay with Bayern Munich

But I also understand that a player who has spent 17 years at Bayern Munich, at the end of his career still wants to gain a new experience."

Describing him as "an icon, a legend", the chairman also said he hoped to see Schweinsteiger back at the club in the future

"He has done great things here, he has won everything," he said

"I suggest to him that we will give him a great farewell match in Munich when he finishes his career, whenever that will be

And when he stops, we will talk about whether there is a second career for him here at Bayern."