​We all know how Manchester United rumours work.

The Red Devils get linked to every player on the face of the planet, but only a select few ultimately make the cut. Most players don't come anywhere close to joining the club, but that's not always for lack of trying on United's behalf.

Over the years, United have pursued countless enormous transfers which they failed to pull off, some of which could have been big enough to shift the entire landscape of football if they had managed to get them over the line.

Here are ten of the biggest failed United transfers of all time. In 1988, ​United were well in the race for then-​Newcastle United youngster Paul Gascoigne. Talks dragged on as United refused to meet the Englishman's initial wage demands, but Sir Alex Ferguson was confident he had done enough to sign Gascoigne, who promised to move to Old Trafford.

The boss went on holiday to Malta and expected to link up with Gascoigne upon his return, only to get a surprise phone call informing him that the midfielder had chosen ​Tottenham Hotspur instead.

He went on to become an England superstar of the 90s, but countless issues plagued his entire career and at club level he ended his career with only an FA Cup, two Scottish Premier Divisions, a Scottish Cup and Scottish League Cup.

​John Terry became 'Mr ​Chelsea' after moving to Stamford Bridge as a youngster, but he might have become Mr United if Ferguson had his way.

In 1995, when he was a 14-year-old midfielder in ​West Ham United's academy, Terry was invited to Old Trafford ahead of a potential move, and the fact that he was a United fan growing up gave the Red Devils some confidence that they could get the deal done.

He played a few games on trial, but was ultimately won over by Chelsea instead. Ferguson was responsible for pulling off so many huge transfers, but he dropped the ball in 1996 when he decided that there was no need to sign Zinedine Zidane from Bordeaux.

Eric Cantona spoke to Ferguson and encouraged him to sign his fellow countryman, who had already been recommended by club scouts. However, the Scot felt as though there was no place for Zidane in midfield as it was a role which he wanted to give to Cantona himself.

Cantona retired just one year later, while Zidane went on to establish himself as one of the greatest of all time with both ​Juventus and ​Real Madrid. Ouch.​ Not only did United miss out on Zidane in 1996, but they also failed to finalise a deal for ​Blackburn Rovers striker Alan Shearer that year as well.​

Shearer ​revealed that he had nearly decided to join United before Newcastle managed to convince him to play for his boyhood club instead. Shearer had dreamed of playing at St James' Park all his life, and United couldn't compete with that.

Shearer went on to become the record goalscorer in the history of the ​Premier League, and he could have made United even scarier than they already were. At that time, Ronaldo had just finished taking the Eredivisie by storm with PSV Eindhoven, but he was yet to test himself in one of Europe's top leagues. So, when United were quoted £20m, the Red Devils baulked and ran. After all, that was a world record at the time.

​​Barcelona weren't afraid and chose to meet PSV's demands, bringing Ronaldo to the club that summer. His time at Camp Nou may have been underwhelming, but by the time he made it to Real Madrid in 2002, he was one of the best around. 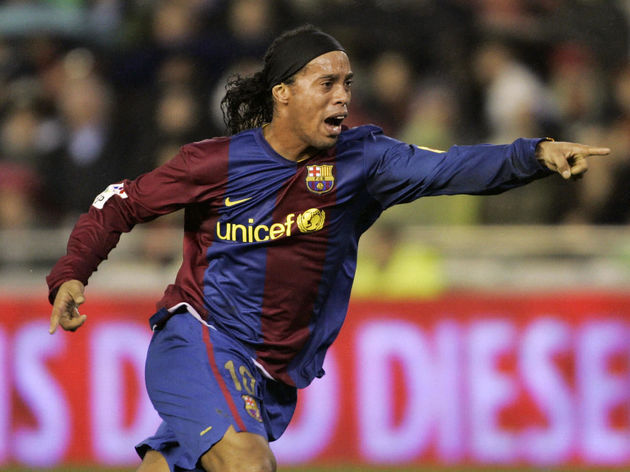 David Beckham's move to Real Madrid in 2003 left a void in United's squad, and they tried to fill it with then-Paris Saint-Germain star Ronaldinho.

The problem was that they faced competition from Barcelona, who were left licking their wounds after failing to land Beckham themselves. They decided that they weren't going to miss out on Ronaldinho as well and threw a blank cheque at PSG to ensure they got the deal done.

As an alternative, United ended up moving for Kléberson.

Oh, and they signed some kid by the name of ​Cristiano Ronaldo as well.​ Academy director Brian McClair went to watch him in action for QPR's Under-18s, but ​Liverpool swooped in just days later and managed to complete a deal before United even had chance to react.

United were even linked with Sterling towards the end of his time with Liverpool, but they had to watch as cross-town rivals ​Manchester City brought him in and turned him into a superstar. The 2011/12 season saw Robert Lewandowski prove himself as one of Europe's deadliest strikers with ​Borussia Dortmund. Everyone wanted him, and United came incredibly close to getting him that summer.

Unfortunately for United, Dortmund quickly interjected and killed the move, forcing the Red Devils to go after Robin van Persie instead. A decent consolation. After shining for Lille in 2011/12​, ​Eden Hazard was the hottest prospect in world football. Players with that title are always wanted at United, and for a while, it looked like the Red Devils were going to land Hazard.

Unfortunately for United, ​Chelsea only went and won the ​Champions League that summer and quickly became infinitely more appealing than they already were, and that was enough to convince Hazard to head to Stamford Bridge instead.

United turned to Shinji Kagawa instead, while Hazard shone for the Blues for seven years, before heading to Real Madrid in a big-money deal. Many United fans were happy to see the back of David Moyes in 2014, but sacking the Scot wasn't all good as it actually led to Toni Kroos' imminent move to United breaking down.

Kroos had effectively agreed a deal with Moyes in the spring of 2014, but after the boss was replaced by Louis van Gaal, everything went quiet. Nobody called to complete the deal, and Kroos eventually changed his mind.

Liverpool even tried to capitalise and strike their own deal for Kroos, but it was Real Madrid who eventually won the race for his signature.