Manchester United Women probably would have preferred to avoid facing both the reigning champions and the double domestic cup winners in their first ever Women’s Super League games after achieving promotion from the Women’s Championship.

But clashes with Manchester City, winners of the Continental Cup and FA Cup last season, and Arsenal, who claimed the 2018/19 WSL title in style, were exactly what they were met with.

The midfielder delivers when @ArsenalWFC need her, once again! pic.twitter.com/HsGLiTHhtR

Casey Stoney’s United lost both games to a single goal and are, alphabetically at least, now bottom of the table below Birmingham and Liverpool after two rounds of fixtures.

On the face of it, it is a poor start to the season, but there is so much more going on here.

United, who utterly stormed the second tier in their debut year as a club – dropping just five points all season and averaging 4.9 goals per game, haven’t been outclassed by their illustrious opponents in either of the first two outings and could easily have taken something in both.

In a record breaking game at the Etihad Stadium on matchday one, it took a wonder goal from City midfielder Caroline Weir, a stunning save from City goalkeeper Ellie Roebuck, and the width of a post to deny new United star Jackie Groenen, to hand the hosts a 1-0 win and three points. 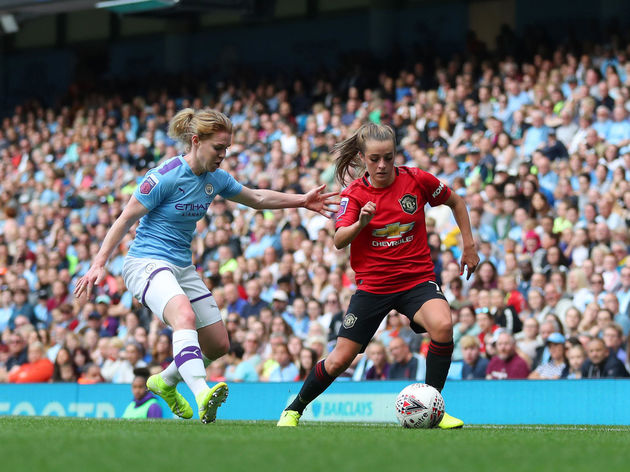 With Weir’s goal a speculative drive from distance, United actually had the better chances.

When Arsenal visited Leigh Sports Village on Monday night, United controlled the majority of the first half. Clear chances were limited but Ella Toone was desperately close to converting a first half header. Hayley Ladd would later fire over the bar in the second half, while Jane Ross brought a fine close range save out of Gunners goalkeeper Manuela Zinsberger.

Arsenal had gained more of a foothold towards the end of the first half and seemed to gain confidence from United goalkeeper Mary Earps, brought in from Wolfsburg during the summer, pulling off a superb save to deny the lethal Vivianne Miedema. The Dutch striker also hit the post during a late Arsenal onslaught that United couldn’t withstand.

Not once, but twice!

​​The Gunners didn’t actually start with World Cup finalist Danielle van de Donk, and it was the classy midfielder who ultimately settled the game in the 89th minute.

United were without their own Dutch star in Groenen, missing from the squad, while Swedish full-back Lotta Okvist was also absent. Both had impressed against City.

“I'm really gutted for [the players],” Stoney told MUTV after the final whistle. “We've pushed the top two teams all the way. We've created good chances again tonight and we haven't taken them. It's a similar story to last week but I can't ask any more of these players.

“Look how far we've come in this short space of time. We're pushing teams right to the edge and for [Arsenal] to celebrate like that when they got the winning goal, they knew they were in a game.”

A tough one to take tonight but extremely proud of this group who gave absolutely everything!! Thank you to our incredible fans who got behind the team right to the end pic.twitter.com/hrw1Asw4dh

For United, this season was never going to be about going straight into a WSL title race alongside the likes of Arsenal, Manchester City and Chelsea. That will, hopefully, come over time. Instead, this season is about being competitive after forming as a club just 15 months ago – fourth place as ‘best of the rest’ is certainly a realistic and achievable target.

If United can replicate these opening two performances as they continue to navigate the WSL fixture list, the positive results will come, and plenty of them. Next up is a very winnable home game against a Liverpool side that have also lost back-to-back games, but not against the elite.

‘Two defeats’ isn’t a proper reflection. ‘Two extremely positive performances against the very best the WSL has to offer’ is much more accurate. Things will only get better from here.