Agent- Dante not moving in January 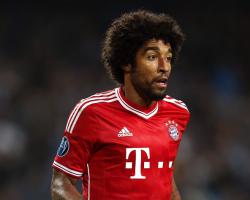 In a bizarre series of events, reports emerged in Brazil claiming Dante had agreed to join United, with the player then going on radio to clarify the situation, effectively stating nothing would be decided until January 31.

However, Marcus Marin, the 30-year-old's Germany-based agent, insists the only discussions that have been taking place are with Bayern Munich over an extension to a contract not due to expire until 2016.

And even if Moyes was to express an interest, Marin feels it would have to be for the end of the season as a January move is a non-starter.

"There is no way that is going to happen," he told Press Association Sport.

"He is not going to leave Bayern in the window.

"At the moment, Bayern are the only people we have spoken to anyway because we are talking over a new contract.

"We are still waiting for an answer from them and although things happen very quickly in football, until that situation changes, we cannot speak to anyone else anyway."

Moyes has not spoken about Dante, although given the player is capable of operating in central defence, at left-back or in midfield, the attraction would be obvious.

If there is a positive to emerge from a fairly confusing picture, it is that, for one of Europe's best players - virtually certain to be a member of Brazil's World Cup squad this summer - United remain an appealing proposition despite their present struggles in the Barclays Premier League.

"Manchester United followed him two years ago," Marin said. "We were in talks with them, but then he ended up at Bayern.

"They are a very good club - and a very big club - so it would be interesting if they were interested in Dante, although I stress we have not spoken to anyone."

Moyes is undoubtedly going to be linked with huge numbers of players until the January 31 deadline given his obvious need to strengthen, which is recognised by virtually everyone - including former right-back Gary Neville.

Chelsea's Juan Mata is another big-name target, although a near Â£40million fee is a hefty one, which would require United to break their transfer record.

It is a rather strange backdrop to Moyes' attempt to reach his first final as United boss - his side will be looking to overcome a first-leg deficit against Sunderland at Old Trafford on Wednesday night to reach Wembley.

Failure would be another hammer blow, robbing United of their most realistic chance of silverware.

There is no guarantee either Wayne Rooney or Robin van Persie will be available to help Moyes out, even though both are on the comeback trail following groin and thigh problems respectively.

And with captain Nemanja Vidic definitely out after the appeal against his weekend red card at Stamford Bridge was rejected by the Football Association, it would be no surprise if the atmosphere around the United camp was gloomy.

But midfielder Tom Cleverley said there can be no such naval gazing.

"We can't let it get our heads down," he told Sky Sports News.

"We are not going to feel sorry for ourselves. We have to stand up and be counted.

"We are still confident it will come back and we will come out of the other side of this tough period and be stronger for it. There is too much quality in the squad and we work too hard for it not to.

"We have had to rethink our targets for the year but this club is about winning trophies.

"We are still well in the Champions League and are in the semi-final of the cup.

"We have to shoot ourselves up the league, then hopefully we can end the season positively."

Cleverley is one of a number whose performances this term have fallen well below expectations.

The 24-year-old has taken plenty of flak, although it is becoming easier to deal with.

"If results are poor and performances are below par you are going to take some stick for it," he said.

"It is all part and parcel of being a Manchester United player.

"It takes a bit of getting used to, but I am growing a thick skin."