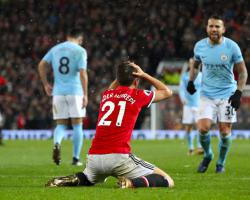 Jose Mourinho's men saw their club record-equalling 40-match unbeaten home run come to an untimely end on Sunday as they lost to neighbours Manchester City in a heated encounter.

The eye-watering gap means the Red Devils are 16-1 with some bookmakers to win the title after just 16 matches, but there is little chance of them giving up.

"It's hard to lose the way we did because we have lost with two unlucky goals," midfielder Herrera said.

"Apart from that I don't think they created too much just I think in the first half one good action by Gabriel Jesus, and he shot on David (De Gea)'s hands.

"After that I think we controlled the game

It is true we played most of the time in our half, but we didn't have too many problems.

"It's a real pity to lose the way we did

It was very unlucky

the first goal the rebound went to Silva and the second Romelu (Lukaku)'s clearance kicked the back of Chris (Smalling).

"It is very disappointing to lose the way did

The only thing we can think now is we are still second, we want to keep chasing them.

"I know it is difficult, but we want to keep winning games and now beating Bournemouth (on Wednesday) is all we can do.

"It is a big punch because of the way we lost.

What sticks in the craw even more for Herrera is the second-half booking he collected for diving in the box.

The Spaniard was fuming at the decision not to award him a penalty, let alone referee Michael Oliver handing him a yellow card for simulation.

"I think the penalty is amazing," Herrera said, having shown reporters video of Otamendi making contact with him.

"He didn't expect to arrive for the ball

I touched the ball first and he stamped on my foot

I think everyone saw it.

"Everyone can make mistakes too, also the referee, I didn't deserve the yellow card

In the first half the same situations with Gabriel Jesus and (Leroy) Sane and they didn't get yellow cards.

"Now that is my fourth yellow card and that is a big problem for me because I want to play every game."

Asked about the current appeal process - or rather lack of - for a yellow card, Herrera said: "In Spain if you get something undeserved you can appeal and they take it out.

"That is one of the things that could improve the Premier League because it is an amazing thing, an amazing competition.

"In my opinion the organisation is the best in the world, but it is a real shame that if you don't deserve a yellow card you cannot appeal afterwards

Hopefully one day that rule can change."