​Manchester United forward Anthony Martial has revealed the extent of the surprisingly graphic injury he suffered when colliding with the post while trying to close down Manchester City goalkeeper Ederson during Sunday’s Manchester derby.

Martial, who scored United’s opening goal of the 2-0 victory from a smart free-kick routine, saw an opportunity to get a second when Ederson miscontrolled a back pass in the second half. 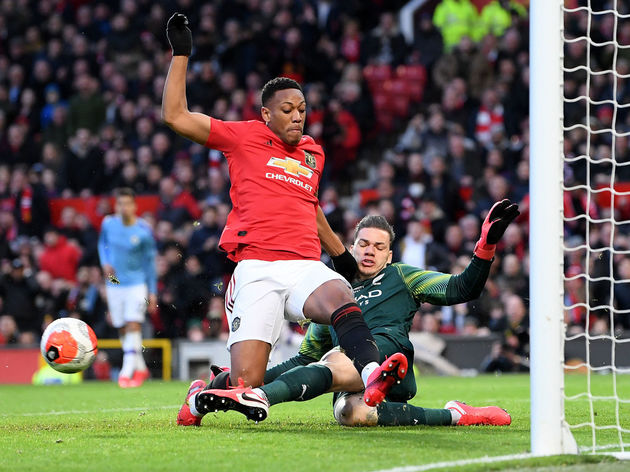 Martial was treated in the goal mouth and continued to play on until being substituted for tactical reasons with just over 10 minutes of the game remaining.

After the game, the 24-year-old was in high enough spirits to share the extent of his injuries on social media, with a short video showing nasty looking gashes on both legs.

Anthony Martial’s injury after crashing into the post 😳 pic.twitter.com/QVu4TICbrd

Having been substituted, a happy looking Martial was seen laughing and joking on the bench next to new United star Bruno Fernandes, whose clever pass had set up the opening goal.

When Scott McTominay scored the killer second goal for United in stoppage time, the pair were seen passionately celebrating and embraced. It already appears to be a blossoming partnership and friendship that will no doubt have United fans excited.

“Anthony and Bruno have hit it off but Bruno is that type of player. Of course, we've got set routines and I've seen them do [the free-kick] before,” manager Ole Gunnar Solskjaer said afterwards, via ManUtd.com.

You can tell Martial & Bruno are already good friends 🙌 pic.twitter.com/bU1ZuZChWw

“Twice Dan James could just square it, once for Bruno, one for Anthony. Anthony should square it for Bruno. Those little things they’ll come, but it’s a privilege because they want to learn as well and they listen to the advice we give them.”