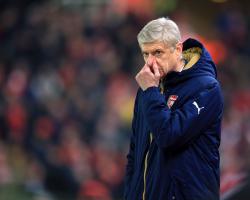 The Gunners were unable to add to their solitary Premier League win in Staffordshire but a 0-0 draw in which goalkeepers Jack Butland and Petr Cech starred moved them back up above Manchester City and Leicester.

Arsenal's rivalry with Stoke emerged from their early duels with Tony Pulis' tough teams and while successor Mark Hughes has implemented a more possession-based system in his time with the Potters, Wenger thought their performance was typical of the challenges they used to face.

The Frenchman was also critical of the Stoke supporters who jeered Aaron Ramsey and chanted about the midfielder walking "with a limp" six years after Potters skipper Ryan Shawcross broke his leg at the same venue.

"Overall it was a battle, an old-fashioned Stoke battle," Wenger said.

They went for a very direct game and we had to show physical response, solidarity, fighting spirit, togetherness - which is what we did.

They were really up for it, they really tried from the first to the last minute.

"We of course wanted to win the game but, looking at the history we have here, it is a positive result

Looking at the results of the other teams that play at the top, it's a positive result

Ramsey had played in four of Arsenal's previous five visits to the stadium where his horrific injury occurred, but was still a target for home supporters, much to the dismay of the Arsenal boss.

"I don't listen too much

I focus on the game," Wenger added.

I don't know what to do about it, I have no influence on it

I don't know what generally you should do about it.

"When people get together sometimes they forget their individual responsibility

Maybe when you go home and watch it on television you are less proud."

Wenger's assertion that Stoke utilised a physical game-plan was scoffed at by Potters boss Hughes, who highlighted the fact referee Craig Pawson did not issue a single caution.

He added: "I don't think there was a yellow card, was there?

I thought it was a good football game, with both teams trying to win a key Premier League game

That's certainly what we were doing."