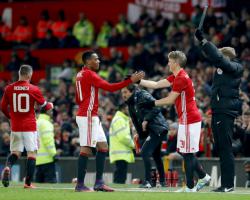 The German World Cup winner, who was frozen out of the first-team picture and forced to train alone earlier in the season, came off the bench for the last four minutes as United won 4-1 at Old Trafford.

The 32-year-old was an unused substitute for Sunday's Premier League draw against the Hammers, his first appearance in a matchday squad since Jose Mourinho took over as manager in the summer.