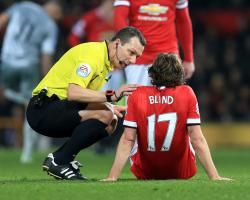 Blind's transfer last year after a productive World Cup saw him reunited with his former Oranje mentor Louis van Gaal at Old Trafford, and he has quickly adapted to the rigours of English football, with 22 appearances and two goals in the season so far.

The 25-year-old is expected to play a key role when the national side faces Turkey in their Euro 2016 Group A qualifier on Saturday, with his United team-mate Robin van Persie and Bayern Munich star Arjen Robben notable absences due to injury.

Spartak Moscow's Quincy Promes was called up as a replacement for Robben, while Blind, in quotes published by De Telegraaf, is ready to bring his United experience to the fore, saying: "In the Premier League, you have to grow.

"I noticed that the rhythm of the game is much higher

The games just went much faster than in the Netherlands

That comes in handy for me in the Dutch national team, and also in my career

"When you develop yourself, you can become a more complete player and that's what I want - to get better every day, to learn little things; and these should naturally be reflected in the game."

The situation in Euro 2016 qualifying is tricky, with Holland in third place after defeats to group leaders Czech Republic and second-placed Iceland around a 3-1 win over Kazakhstan, though they clawed a bit more ground back with a 6-0 thrashing of Latvia in mid-November.

Amid the injury worries for coach Guus Hiddink, Blind is ready to take on the extra workload, saying: "Subconsciously, I notice my status has changed

It adds a sense of responsibility."

Bayer Leverkusen duo Hakan Calhanoglu and Omer Toprak are on the list, though Atletico Madrid man Arda Turan is only expected to travel for Turkey's friendly against Luxembourg on March 31.

Former Blackburn forward Colin Kazim-Richards - now at Feyenoord - is also in the squad for the Amsterdam ArenA clash as is Saint-Etienne striker Mevlut Erding.