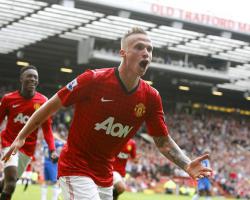 The Dutchman's position at Old Trafford has been under threat ever since new manager David Moyes made his big-money bid for Leighton Baines during the summer, and then switched his attentions to Fabio Coentrao on transfer deadline-day - although neither move came off.

As Moyes has since spoken passionately about Patrice Evra's influence at United, it pointed firmly to Buttner being ushered out of the exit door.

The 24-year-old has been linked with moves to both Galatasaray and Tottenham in recent weeks and given the problems Moyes is presently wrestling with at United, Buttner could be forgiven for feeling a move is the best solution to his own lack of opportunities.

However, speaking after Sunday's 2-1 FA Cup defeat by Swansea, when he was handed only his fifth start of the campaign, the former Vitesse Arnhem defender was adamant nothing could be further from the truth.

"I know there are some clubs that want me but I'm happy here and want to play for Manchester United," said Buttner.

"I don't want to leave. I want to fight for my place.

"I don't care if people talk about other players in my position. I just want to play my game and show that I can handle this level.

"I know what I can do. I am still young and focussed 100 percent on being here. I just have to wait for my chance and take it."

On another desperate day for United, Buttner was one of the few who emerged with any credit.

In the first-half particularly, he exploited the space down United's left flank, delivered a superb cross for Javier Hernandez's equaliser and created danger for Swansea on numerous other occasions.

"The players know that I will always try to cross the ball, which is why Javier got his goal," said Buttner.

"It was nice to play. I want to play every game. But it is hard because we lost. If we win, the feeling is different."

The left-back area is far from the heart of United's problems.

There is a ready-made excuse for this latest defeat in Fabio's dismissal just four minutes after his introduction as a second-half substitute.

Using it would overlook an obvious lack of confidence which is seeping through a squad that won the Premier League title by 11 points last season but has now lost four of its last six home games and effectively only has the Champions League and Capital One Cup to play for in terms of silverware.

Moyes' frank admission of January not being the best time to bring in new players hardly helps generate a feeling of optimism amongst fans, who remain loyally behind the Scot, no matter what private misgivings they have.

The obvious lack of impact made by Marouane Fellaini since his Â£27.5million move from Everton may make Moyes even more tentative about spending big sums this month, yet, without reinforcements in midfield particularly, it is hard to see the situation improving to any great degree, which will put United's hopes of a top four place in peril.

"It is a massive blow, a really bad result.

"There are a lot of angry and hurt players in there. We have let the manager, the fans, everyone down. It is not good enough."

The view was endorsed by pundits on the post-match phone-in show.

"Even with 10 men, I was still confident," said former midfielder Quinton Fortune.

"I still expect United to have that belief. You have to fight for each other and work harder."

Lou Macari added: "It used to be teams came to Old Trafford and didn't get a kick. It was one-way traffic for most of the game and they went away losing.

"The last three or four games at Old Trafford have not been the case. We have been struggling to get near them."

The one meagre positive is the speed with which some sort of redemption can be achieved in Tuesday's trip to Sunderland for a semi-final first leg likely to herald the return of Wayne Rooney, Michael Carrick and Nemanja Vidic, and which simply must be won.

"We have to believe in ourselves," said Buttner.

"Getting to Wembley would mean everything. It would be good for the club to win this semi-final."