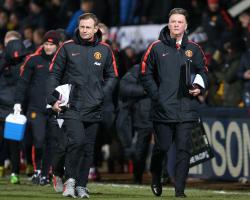 Cambridge, the lowest ranked team remaining in the competition, were rewarded for their endeavour with a return in Manchester which will provide a significant boost to their finances.

Dutchman Van Gaal, who said a 4-4-2 formation gives him a "twitchy a**", selected four at the back and suffered an evening full of anxiety in the 0-0 draw.

At times it was difficult to tell which side had won the competition a record 11 times as the Us, who twice won at Wembley last season, refused to be cowed by their more illustrious opponents.

Richard Money's men had Van Gaal squirming on his posterior on the concrete seat in the visiting dugout, particularly when packing the six-yard box at corners.

Cambridge were deservedly level at half-time and indebted to Chris Dunn for staying so entering the final 30 minutes when the goalkeeper saved from Radamel Falcao.

It took United until the 64th minute to score at Yeovil in the third round and, despite occupying Cambridge territory for the majority of the second half, they could not find an opening at Cambridge.

Cambridge drew with United 1-1 in their previous meeting at the Abbey Stadium - as part of a 4-1 aggregate League Cup loss in 1991 - and held on once again.

United are still in with a chance of a first FA Cup win since 2004, but must do better in the return.

Wayne Rooney and Juan Mata were not included in the visitors' matchday squad, but Van Gaal refused to take Cambridge lightly

David de Gea started in goal, British record signing Di Maria in midfield and expensive loanee Falcao up front against a Cambridge side for whom Luke Chadwick, once of Old Trafford, was on the bench.

But Michael Carrick was the only United player to show any composure in a first half in which Cambridge, 75 places below their opponents in the league pyramid, more than held their own.

Marouane Fellaini was booked for a foul on Sulley Kaikai, whose pace also troubled Antonio Valencia and Phil Jones.

The Us sent seven of their players into the six-yard box at corners, which meant, along with their markers, De Gea had 14 players to negotiate.

From one such set-piece the ball pin-balled around, but Josh Coulson could not keep his header down as it finished on the roof of the net.

Another anxious moment came when Jones gifted Ryan Donaldson the ball, only for the Cambridge winger to over-hit it as he tried to play it out of his feet.

United were aggrieved when Adnan Januzaj was upended by Michael Nelson on edge of the hosts' box, but no free-kick was given by referee Chris Foy.

The visitors' accuracy was woeful, with Di Maria shooting out of the ground and finding the target only with a weak shot which Dunn held.

Dunn had to readjust to save a Di Maria effort which deflected off Liam Hughes, with the pace taken off the ball.

Januzaj also hit a tame effort at Dunn, otherwise United failed to test the goalkeeper, with Di Maria striking a free-kick from a promising position over.

United resumed with greater purpose and pegged Cambridge back in their own half.

Dunn saved a shot straight at him from Januzaj and made a fine stop to deny Falcao after Carrick had threaded the ball through to the Colombia striker.

United sent for the cavalry with 23 minutes remaining, with Van Persie replacing the ineffective James Wilson and Ander Herrera on for Fellaini.

Centre-back Jones, who bizarrely, and poorly, took the set-pieces throughout, shot off target from open play and Van Persie was unable to keep a shot on the turn down.

Chadwick came on with 14 minutes go to a chorus of "Chadwick 1 Gerrard 0" - a reference to the former United man's Premier League winners' medal.

The Us were hemmed deep inside their own half and playing on the break, but United's shaky defence appeared vulnerable.

Jones passed to Chadwick, allowing Donaldson to break, but Januzaj's challenge allowed the visitors to recover.

United had chances as the game entered stoppage time, but Dunn denied Van Persie and Di Maria to earn a glamour replay.