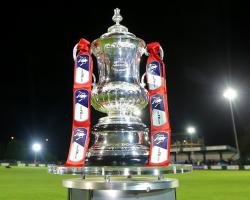 The draw, which was held at Kingsmeadow, means t he lowest-ranked side left in the competition will welcome Louis van Gaal's Red Devils to Abbey Stadium on the weekend of January 24-25

A total of 79 league places separate Richard Money's League Two side with the third-placed Premier League outfit, but as has been seen on so many occasions before that does not always matter in the FA Cup

When Lawrie Sanchez, who famously nodded home the only goal of the 1988 Cup Final for Wimbledon against Liverpool, and grassroots coach Stef Loucaides pulled those names out of the hat live on BBC1 there was an audible gasp at the pairing