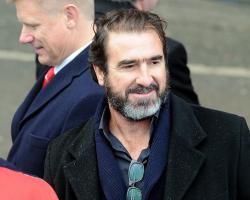 Cantona said the Dutch manager's philosophy fits perfectly with the club - and described United as "kings of the city" following their 4-2 derby triumph over Manchester City on Sunday.

The former France and United striker told a press conference ahead of the Laureus Sports Awards in Shanghai: "United's a great club, so sometimes you have a season when you have to lose games and you finish fourth, fifth

But it's a great club

It will be at the top of the table.

Asked whether he would consider managing Manchester United, he added: "No, I think today they've found the right one

"It was great to win the derby

I was proud and very glad

It's good because now they are the kings of the city

The two clubs are two of the best clubs in England, so it's very important to win this game."

Cantona also claimed, controversially, that it was Catalonia rather than Spain that won two European Championships either side of the 2010 World Cup.

Because they won with 10 players from Barcelona

My grandparents are from Catalonia, from Barcelona

They arrived in France in '39

There was a civil war

So, I am very proud of Barcelona and all that they have done."

Asked if Cristiano Ronaldo or Lionel Messi was the best player in the world, Cantona made a surprise choice - Argentina international Javier Pastore from Paris St Germain.

Why? Because I watched two games just to see Pastore playing, giving passes

He has got something special

Because football is interactive

It's why footballer is so popular, I think

And Pastore can do things that the other ones don't know.

"It's interactive but he does things that surprise you every time

Not only in scoring goals, spectacular goals - everything

He's the most creative player, I think, in the world today

It's why I think he's the best player in the world, because I love this kind of player."