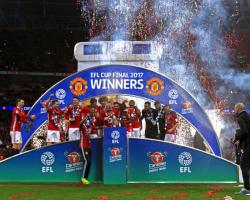 The draw is scheduled to be made at approximately 11:15am local time but the time difference with China means that is 4:15am UK time.

It is the latest controversy to hit the rebranded competition this season after Charlton were shown to be playing two teams in a graphic displaying the first round draw and John Salako got confused about which teams were playing at home or away in the previous round's draw.

The seven Premier League clubs who qualified for European competitions enter the draw at the third round stage, including holders Manchester United