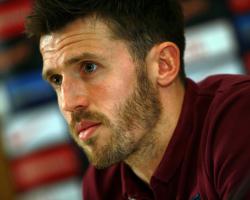 Carrick's England career has been a stop-start affair ever since he earned his first international call-up some 14 years ago.

Despite spending nine years as a key part of Manchester United's starting XI, Carrick has played for England just 31 times.

But as time has progressed, so has the country's appreciation of Carrick's talents.

The 33-year-old midfielder is the oldest member of the squad, but manager Roy Hodgson sees the player as a key part of his plans for Euro 2016.

Carrick, therefore, is relishing the opportunity to finally make his mark with England even though he is in the twilight of his career.

"I am the older one and that is just something I am used to now," said the midfielder, who signed a one-year contract extension at Old Trafford last week.

"I have a new lease of life

I am just enjoying my football.

"You get to a certain age and you don't actually know how long you have left.

"I feel great at the moment and I've certainly got another year left in me and I am just happy to be part of it, and make the most of it because it's a special thing to be involved in and I am very grateful for that.

"I love seeing the younger lads come in but it's important to have experience."

The fact that Chris Powell, Danny Mills and Alan Smith were on the pitch when Carrick came off the bench to make his England debut in the 4-0 win over Mexico 11 years ago shows just how long he has been involved with the England set-up.

Hodgson is the fourth England manager Carrick has played under

He was left out of the Euro 2012 squad and deemed good enough only for a place on the standby list for the World Cup last year.

Carrick never gave up on his country despite the double-snub, though.

"It was a big blow (not being picked for the World Cup)," Carrick said

"But I just wanted to get back playing well for United and if the opportunity came along again then great, if it didn't then it is just something you have to deal with

Now it's not so bad.

"When you have setbacks in your career when you come through them and you are better for it.

"You appreciate where you are, what you have got

You are in a better state to deal with it and move forward and I have done that throughout my career from the start and that is what has shaped me into the way I am now."

With Jack Wilshere out through injury, Carrick is almost certain to drop into the holding midfield role if Hodgson persists with the 4-4-2 diamond formation he used against Scotland in November.

"It's a position I am used to playing in," Carrick said.

"If that is the way the manager moves forward then that is fine and if I get a chance then great, I would be more than comfortable there."