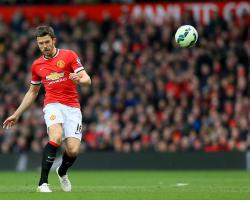 Carrick has been one of the most consistent performers for United this season since his return from an ankle injury.

United have lost just one game he has started this term and manager Louis van Gaal has been impressed by his vice-captain's form and maturity.

For that reason, United have exercised their right to extend the midfielder's contract by another 12 months and Carrick could not be happier.

"It's fantastic to know that I can continue my incredible journey with this great club," the 33-year-old said.

Carrick has collected five Premier League winner's medals and has also won the Champions League and League Cup since he moved to United from Tottenham in 2006.

Success has been hard to come by since Sir Alex Ferguson left, but the England international is sure better times lie ahead under Van Gaal.

"I am thoroughly enjoying my football and the team are progressing in the right direction under Louis van Gaal," Carrick said.

"We are all incredibly focused on getting this club back to where it belongs and competing with the best teams in the world."

Van Gaal heaped praise on the player at a press conference on Friday.

"He is a very important part of my selection," he said.

"Wayne Rooney is my first captain and Michael Carrick is my second captain and that says enough what I think about those players.

''He has also an excellent pass forward

I like as a manager passers forward so that's very important for me."