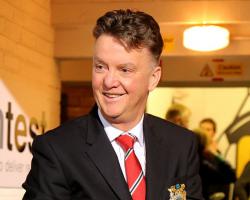 United take on holders Arsenal at Old Trafford on Monday with an FA Cup semi-final spot at stake as van Gaal targets his first trophy in English football.

Van Gaal is acutely aware however that his over-riding target is finishing in the top four to ensure that United do not suffer the financial and reputational set-backs of another season having to only watch while Europe's elite clubs battle it out.

The United boss said he agrees with Arsenal manager Arsene Wenger that securing Champions League football is effectively a trophy.

Van Gaal said: "I want to get always the goals that we have set, and the goals we have set is the top four, and a trophy would be fantastic.

"It's fantastic for the players and the manager but our role in our first year together is to win a place in the Champions League.

"To finish in the first four is a fantastic result and for us at Manchester United even more I think.

"If you win the FA Cup you are not in the Champions League but you have won a title."

Meanwhile, Marouane Fellaini admits United face a "massive game" against Arsenal if they are to end the season with a trophy.

The Belgium midfielder, who was on the losing side at a Wembley FA Cup final with Everton, insists however that Louis van Gaal's side can take confidence from their last-gap win over Newcastle in midweek.

He says however that United need to win at Old Trafford to avoid a tough replay at the Emirates.

Fellaini told MUTV: "It will be a challenge

Monday is a massive game

The FA Cup is a special competition, a big trophy in England

I lost a final

I played in a semi-final

This season, I can win it.

We have a big game on Monday, so it is good for the confidence.

The spirit was good, we kept going and that is important."

Striker Robin van Persie will miss the clash against his old club due to an ankle injury, and defender Jonny Evans will sit out after he was banned by the FA for six matches for spitting at Newcastle's Papiss Cisse.