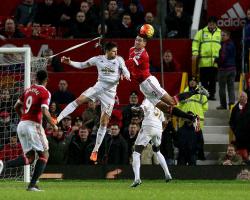 United's eight-match winless run came to an end when they defeated the Swans 2-1 at Old Trafford.

Anthony Martial scored his eighth goal of the season when he converted Ashley Young's cross, but Swansea looked to have stolen a point after Gylfi Sigurdsson looped a header over David de Gea.

Luckily for under-fire United boss Louis van Gaal, Wayne Rooney came to the rescue 13 minutes from time when he cleverly flicked Martial's cross into the net to ensure the hosts began the year on a high.

Smalling admits the haphazard nature of the Premier League is the only reason United are still in with a shout of the title, and he believes the Red Devils must now go on a prolonged run to ensure themselves a place in the top four at the very least.

"December was a poor month but it's a great feeling to get that win and I think we've shown that we've fought hard and we need to kick on," the United defender told MUTV.

It's a great start to the year and we can't afford any more slip-ups now so we need to make sure we play every game like this.

"It definitely does [need to be the start of something]

We've dropped far too many points for our liking

If we can get on a run then we can start looking up that table."

His 238th goal for United came at a good time for his manager, whose position has come under scrutiny of late, and the player himself.

It was Rooney's first league goal in eight league matches and it was also the first time he and Martial had scored in the same Premier League game.

Smalling hopes the duo will start scoring on a regular basis now.

"It's terrific (for them)," Smalling said.

"They were two very well-worked goals and to see your two strikers get on the scoresheet, hopefully with the number of chances that we create it's only a matter of time until these goals start coming and fingers crossed they'll start coming now."

Martial powered home Ashley Young's cross less than two minutes after the restart to ease the tension that had built inside Old Trafford following yet another dull display in the first half.

Martial had a lot of pressure on his shoulders when he signed for United for ÃÂ£36million in September, but the 20-year-old Frenchman has already proven to be a big hit with supporters thanks to his pace, composure and willingness to take risks.

"He's so direct and he's creating a number of chances

I know I wouldn't want to play against him.

He's under a lot of pressure but you can see right from the off he's not afraid to get at players and use his pace and tricks.

"He's a terrific player and I'm glad we've got him."