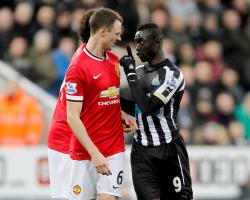 Evans was charged by the Football Association for spitting at Newcastle striker Papiss Cisse during the first half of United's 1-0 win against the Magpies last Wednesday.

The Red Devils defender, who denied the charge, was found guilty by a panel of former referees while Cisse received a seven-match suspension, including an additional game for a ban earlier in the season, for spitting back in retaliation.

Crerand, who played more than 400 times for United between 1963 and 1971, says the FA has overreacted to what he believes was a simple misunderstanding.

"You get people who make decisions about what the ban should be who know absolutely nothing about professional football and that come from clubs nobody has ever heard of," Crerand told BBC Radio 5.

"All of a sudden they're put in the spotlight for a little period of time and it's their little moment of fame.

"I was at the game and let me tell you something, Jonny Evans didn't spit at the player - the other player (Cisse) thought he had spat at him and he spat at Jonny Evans

Evans was spitting at the ground."

The final game of the 27-year-old's suspension will be either an FA Cup semi-final if United beat Arsenal, or a league trip to Chelsea.

"How many times have you been to football matches and seen people spit? You see it hundreds of times," Crerand continued

"I thought the whole thing was just a mistake from both players and they've been punished for it."