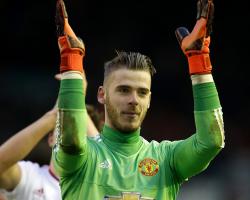 De Gea's future at United has been thrown into doubt following the news that Real Madrid will soon be hit with a transfer embargo.

The Spanish giants, who missed out on De Gea's signature last summer because they failed to submit the requisite paperwork in time on deadline day, will not be allowed to register anyone in the next two transfer windows after FIFA found them guilty of breaking the rules on signing young players, but are free to add to their squad this month.

The ruling has prompted suggestions Madrid could rekindle their interest in the 25-year-old De Gea, but Schneiderlin has no doubt his team-mate will be staying at Old Trafford.

"David is a very important player in our squad," the United midfielder told MUTV.

He is fully committed to this football club.

"When you have a player like this in goal, it's good for us because we know we are not going to concede many goals and he is going to make some saves."

An uncharacteristic error at Bournemouth aside, the goalkeeper has been in outstanding form since Van Gaal recalled him into the starting XI.

His latest superb display came on Sunday when United won 1-0 at Liverpool.

Wayne Rooney grabbed the headlines with his 78th minute match-winning volley, but in reality it was De Gea who ensured all three points would be coming back down the East Lancs Road.

De Gea rushed off his line to deny Adam Lallana when he was through in the first half and after the restart, the former Atletico Madrid man pulled off two athletic saves in quick succession to deny Emre Can and Roberto Firmino.

Chris Smalling admits the 11th hour collapse of De Gea's proposed move to the Spanish capital proved to be a big boost for the team.

"When we knew he was lining up for us the whole season, it was a great feeling because he is one of the best," the United defender said.

"He pulled off a great save (against Liverpool) and his distribution, especially some of those balls down to Wazza (Rooney) and Jesse (Lingard) were terrific and really set us up on the attack.

"David is a very calm guy but on the pitch he is talking to us as a unit.

"We know his game inside out so it's good to know that if we get beat as a defence, we have a great chance to keep that ball out."

Like De Gea, Rooney has had to spend some time out of the starting XI this season.

The United captain suffered from ankle and thigh injuries earlier in the campaign and was dropped for the Boxing Day defeat at Stoke.

A few eyebrows were raised when Van Gaal dropped his captain for the crucial match, but Smalling believes the move was beneficial for the striker, who has since gone on to score five goals in five matches.

"It was a busy Christmas period, but since that game he has come back in and has shown he is a top-class performer," Smalling said.

"(Being dropped) can refresh you and spur you on a bit more to prove to everyone how good you are and people don't forget that.

"It's good to see he is back among the goals.

"Strikers go through periods where you don't score but the best ones are the ones that come back and get on another run and Wazza has shown that throughout his career."

After Sunday's match, Rooney admitted he had offered a few frank "reminders" to his team-mates at half-time about the importance of the biggest fixture in United's calendar

Schneiderlin admits it was a heated atmosphere inside the dressing room at the break.

"In the first half, we didn't win enough second balls," the Frenchman said.

"When we came into the dressing room after the first half, there was some screaming and shouting but of course that is normal because in a derby you cannot lose the battle."