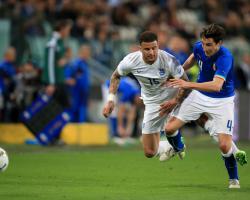 Journalist Gianluca DiMarzio previously stated that United and Darmian's representatives had been in discussions for around 4 months, with just a fee to be agreed between the Premier League side and Torino.

And now, reports from Italy suggest that sticking point has been resolved with a fee of just over ÃÂ£14million being agreed between the clubs

United and Torino will now work to iron out any minute details before announcing the players transfer.

Darmian will be a welcome addition to the Red Devils squad with Louis van Gaal's side using winger Antonio Valencia as a right back for the majority of last season.

25-year-old Matteo Darmian is highly rated in Italy and has impressed for the Italian national team, being a noted positive in an otherwise dismal World Cup for the Azzurri last year.