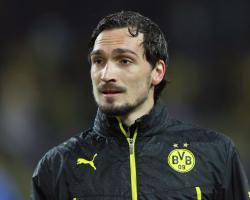 The British media have linked the 26-year-old to a 37 million pound (49.46m euros, 55.97m dollars) bid from Louis van Gaal's United with the Dutch coach a fan of the German defender.

Hummels has a contract until 2017 and says the latest speculation will not distract him from helping Dortmund climb up the Bundesliga table after losing ten of their first 17 matches.

The Germany star says he expects to stay with Dortmund even if they miss out on international competition for the first time in five years next season.

"Are you looking for a headline? No, I'll keep doing what I have done for the last seven years," he told German daily Bild.

"I'll take what comes at me and just look forward to the start in Leverkusen and the second half of the season.

"Everything else I will blend out.

"I am really relaxed and I'm thinking only of what part I can contribute on the field and in the changing rooms, so that we improve and leave the relegation places as quickly as possible."

Borussia face fellow Champions League side Bayer Leverkusen away on Saturday as the Bundesliga resumes after the winter break.

With Dortmund second from bottom, speculation is rife their stars will leave if they miss out on qualifying for Champions League football or, in the worst case scenario, are relegated.

Germany midfielder Marco Reus has been heavily linked to Real Madrid with United also reported to be interested in defensive midfielder Ilkay Gundogan.

But Hummels says constant transfer rumours will not unsettle his team in their battle against relegation.

"I can't imagine it will, it isn't the first time for any of us that this has been written about us," said Hummels.

"It's always been the case that things like this are spread about me and I'm still here."