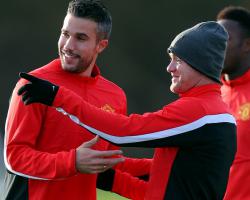 Rooney has been missing with a groin strain since the New Year's Day defeat by Tottenham, while Van Persie suffered a thigh problem in the Champions League win over Shakhtar Donetsk last month.

However, both are in contention to face Ole Gunnar Solskjaer's men, along with ?37.1million new-boy Juan Mata, who is set to make his debut.

"They have all trained today," said Moyes.

Moyes could also have midfielder Marouane Fellaini back after wrist surgery.

Meanwhile, the United boss has dismissed rumours of a big-money bid for teenage sensation Adnan Januzaj from Paris St-Germain.

"I think you have been listening to too much speculation," said Moyes to a question about Januzaj's future.

"Adnan is very much part of what we are doing and it will continue to be that way."

Meanwhile, Moyes has side-stepped questions over the future of Rooney, whose contract expires in 2015 but has been linked with a massive extension, that could net him ?300,000 a week.

"It is one I have left with (executive vice-chairman) Ed Woodward and Wayne and his advisors," said Moyes.

"We will give you an update on it at the right time. Right now I would prefer to talk about his performances."

Moyes might find himself in rather a strange situation on Tuesday given the reception for the opposing manager is going to be far more enthusiastic than his own given the depth of feeling for Solskjaer at Old Trafford.

Yet the Scot feels such accolades are fully deserved.

"He deserves it because of what he has done here," said Moyes.

"He won the Champions League and was a great ambassador for Manchester United."