Dutch connection could Depay off 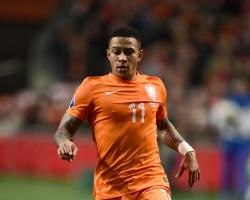 Both Premier League giants have been linked with the ÃÂ£25million-rated PSV Eindhoven and Holland striker.

But De Boer, the former Ajax, Barcelona and Holland midfielder, believes the presence of Louis van Gaal as United manager could give the Old Trafford club an advantage.

Depay, 21, played under Van Gaal during the latter's spell as national team boss.

De Boer told talkSPORT: "I don't want to say which club is more suitable for him, but if he goes to United he knows there is a Dutch coach there who knows him from the World Cup

That is an advantage."

De Boer has been impressed and has suggested he could become one of the world's best.

He said: "He is one of the biggest talents in Europe.

"He has skill compared to a young Cristiano Ronaldo

He is very lively, technically unbelievable, very skilful, very fast, he has a great goalscoring record, he can shoot from every distance - he has everything.

"For me, he is without doubt one of the best talents we have."