Echoes of Moyes as Van Gaal grasps at straws 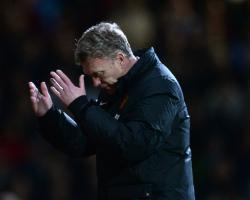 United's regression under Moyes was spectacular, but it was his continued insistence that progress was being made -- despite stark evidence to the contrary -- that particularly irked supporters.

Fans could just about countenance the team slipping back after the departure of Alex Ferguson, but hearing Moyes claim that his side should aspire to play like Manchester City or that Liverpool were travelling to Old Trafford as "favourites" was impossible to stomach.

With United still on course for Champions League qualification, Van Gaal's stock has fallen no way near as low as Moyes's did, but the defence he mounted after Monday's FA Cup elimination by Arsenal raised more than a few eyebrows.

Asked whether he regretted his decision last September to sanction the departure of Danny Welbeck, who scored Arsenal's winner, in order to make room for the misfiring Radamel Falcao, Van Gaal's justification was unconvincing.

Falcao, he explained, had "scored four goals" and provided "three or four assists", while the Colombian's presence, he said, "stimulates" his team-mates.

The Dutchman also identified Antonio Valencia as United's best player, despite the fact that, having been caught out of position for Nacho Monreal's opener, it was the Ecuadorean's under-hit back-pass that allowed Welbeck to run through and settle the tie.

But there was no disguising the bare facts, following a night that ended with Angel di Maria being sent off after reacting to a yellow card for diving by petulantly plucking referee Michael Oliver's shirt.

There will be no first-season silverware for Van Gaal, who has habitually been quick to make an impression at his former clubs, while United will go two seasons without a significant trophy for the first time in 26 years.

Elsewhere, reaction to United's failure was less sugar-coated, with former captain Roy Keane branding the defending that led to Arsenal's opener "disgraceful" and warning it would be a "disaster" if they now failed to qualify for the Champions League for a second season running.

Writing in The Daily Telegraph, Henry Winter said: "Van Gaal is a highly respected manager, boasting one of the best CVs in the game, but he has not got the defence organised or midfield and attack joined up enough."

According to Oliver Kay of The Times, for all Van Gaal's insistence that his philosophy is taking root, United continue to resemble "an expensive jigsaw with several pieces missing and others in the wrong place".

Currently two points above fifth-place Liverpool and a point below third-place Arsenal in the race for a top-four finish, United now face a formidable month of fixtures that will define their season.

Their next five league games include home matches against Tottenham Hotspur and champions Manchester City and trips to in-form Liverpool and league leaders Chelsea.

"It's a massive, massive last two months of the season for them," former defender Phil Neville told the BBC.

"The results have been OK, but the performances have got to improve."

Van Gaal, though, declared that his team would emerge stronger from their FA Cup elimination, which saw Arsenal end a run of 10 games without victory at Old Trafford.

"No, it is always good

We have showed a fantastic fighting spirit."