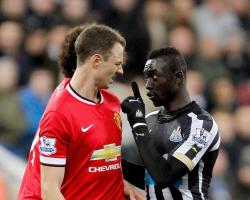 The 27-year-old reacted angrily during Manchester United's 1-0 win at St James' Park earlier this month with television replays appearing to show him spitting at the Magpies striker.

Cisse was banned for seven games after a clearer spit in the aftermath of the clash between the two players, with the extra game due to a previous red card for Newcastle.

However, Evans still does not accept his part in the incident and says his family would have been "disgusted" with him if the allegations were true.

"I did not have the intent to spit at an opponent, so when the FA charged me with that I could never accept it," Evans told The Times.

"To spit at anyone is one of the most disgusting things you can do; it's low and cheap

I would never think to spit at someone

"So I can totally understand there is an image around that, and in the British game and our society it's not something that is accepted, and rightly so.

"But I was able to go home and look my mum and dad in the eye because if I'd genuinely spat at someone I think they would have been disgusted in me.

"It's not the background I come from in Northern Ireland

My mum and dad would have given me a rollicking if I had done that."

Evans admitted that he is a 'habitual' spitter and has been pulled up on it by his wife Helen several times.

He is now working to cut it out of his game and believes it could be a nervous habit.

Evans added: "In training this week I turned to spit and thought, 'No, I can't spit' and tried to stop myself

So that's something I'm trying to work on."

Evans has still to serve part of his ban and will miss the Premier League games against Liverpool, Aston Villa, Manchester City and Chelsea.