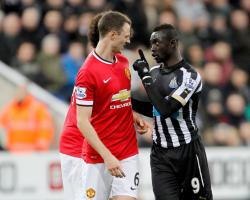 The written reasons for Evans' six-match ban were released by the FA on Thursday.

The three members of the regulatory commission accepted 27-year-old Evans was the only person who could know his intent, but stated: "I t is clear that Mr Evans is looking directly and indeed aggressively at Mr Cisse

His lips are 'pursed' and he is close to Mr Cisse

"If he was, as alleged to be the case, a person who 'habitually spits', then the c ommission were concerned as to why he did not turn his head away from Mr Cisse when so spitting

"If that had been a family member or indeed another team member or his manager in front and below him would he still have carried out the same manoeuvre?

"Mr Evans had (and has) a duty of care, if spitting for whatever reason, not to direct the same in the general direction of an opponent, or indeed anyone else

"There may, in some quarters, be substantial sympathy for Mr Evans, but the video evidence shows that he did what he did, and the ordinary man in the street will find his action to be simply disgusting and should not be allowed in any walk of life, let alone on any football field."