Evans- United must rein it in 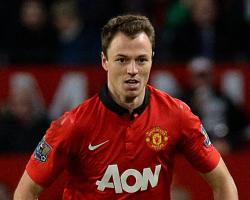 The 2-1 reverse was United's sixth loss of David Moyes' debut campaign as manager.

And whilst most of the post-game analysis centred around referee Howard Webb's failure to award a penalty after Hugo Lloris had taken out Ashley Young near the end, it ignored the concession of two more needless goals that left United chasing the game.

It is not the first time it has happened either.

The Red Devils' dire home form is the major reason why they are so far adrift of the Premier League pacesetters, and remain five points off a Champions League slot.

And Evans feels the answer may lie in adopting a less ambitious attacking approach in front of their own fans.

"It is hard to explain," said the Northern Ireland defender.

"They caught us on the break a little bit for the two goals so maybe we need to be a bit more patient.

"Away from home, you tend to be more defensive in your set-up.

"Maybe at home we are leaving ourselves a bit too open.

"We want to entertain our fans and score goals but maybe that is to our detriment a little bit."

The result extended a disappointing sequence against the Premier League's top sides.

Eight matches against the sides who accompany United in the present top eight of the table have so far yielded a miserly five points.

It is evidently not good enough to sustain any kind of meaningful title defence and unless it improves markedly over the second half of the season it will cost them a place in next season's Champions League.

"It is disappointing but we will keep plugging away," said Evans.

"We actually played quite well in the previous six games but we have started the New Year on a bad foot and we need to get positive results again."

It is not the transition envisaged following Sir Alex Ferguson's retirement.

After all, celebration at a fourth place finish would be hailing United's worst performance since the 1990-91 campaign, when they finished sixth.

It underlines how important Ferguson's exit was, which even Evans did not truly appreciate.

"As a player I probably didn't realise the magnitude of it until I stepped back and looked at it from the outside," said Evans.

"Some of the results have not gone as planned but to be fair to the manager and coaching staff, they have never been down in the dumps.

"They have always tried to improve us and I definitely think they are improving us in certain aspects of the game where maybe we were lacking."

However, with Robin van Persie still to shrug off a thigh problem that has kept him out for six games and Wayne Rooney attempting to manage a groin injury, Moyes is hardly entering the second half of the campaign in a position of strength.

It merely brings added focus to United's work in the January transfer window. Moyes has repeatedly stated it is difficult to do any meaningful business in the middle of the season, but others feel the club are likely to be active.

"From all the noises coming out of the camp, I wouldn't be surprised to see a bit of activity," club ambassador Andy Cole told United Review.

"Our club, historically, doesn't do too much in January but we have a new manager with new ideas.

"I just wonder who will want to sell their better players halfway through a season. There are also inflated prices to consider as well.

"You get chairmen bumping prices up because they know their players are in demand and other clubs will pay what they have to pay for what they need.

"Those chairmen are in very powerful positions, especially if the players concerned are tied down to long-term contracts."