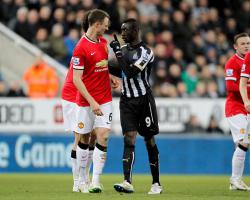 The United defender and the Magpies striker became involved in an angry first-half exchange during which the Senegal international took exception to the Northern Irishman's challenge, and television replays suggested that the pair had resorted to spitting.

Evans' manager Louis van Gaal, who along with match referee Anthony Taylor did not see the incident, was quick to leap to the defence of his player, although the Football Association seems certain to intervene.

Van Gaal said: "I didn't see that from the bench

It's too far to see spitting, so I cannot judge that

But I cannot imagine that Jonny Evans, because he is a very modest person, that he could do that

The Dutchman left St James' Park a happy man after seeing Ashley Young snatch victory at the death when Tim Krul could only hack Mehdi Abeid's ill-judged back-pass into his path.

Krul, who was a key figure in Van Gaal's Holland squad at the World Cup finals in Brazil, had turned in an excellent individual display to keep the visitors at bay, although opposite number David de Gea too had important saves to make.

Van Gaal said: "We have waited a long time for the winning goal, but it shows also again the fighting spirit of our team - that I have said already a lot of times - but for me, it was very important that we won today, and you see all the results of our competitors in our rat race together, so it shall continue."

Defeat was hard to take for Newcastle head coach John Carver, who was convinced his side should have been awarded a 10th-minute penalty for Chris Smalling's challenge on Emmanuel Riviere.

The Frenchman went on to squander two gilt-edged opportunities with Cisse wasting a third.

Carver said: "What I will say is I thought we had the best chances of the night - Riviere's chance in the first half, his chance in the second half and Papiss' chance, we had three good chances tonight, and you would put your mortgage on Papiss putting his away.