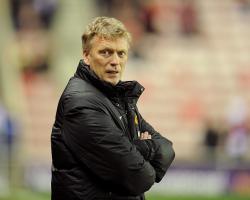 Moyes said United were "playing referees as well as the opposition" after the 2-1 loss.

It follows on from Moyes saying it was "scandalous" that United were not awarded a late penalty against Tottenham at Old Trafford.

The United boss could face a charge if it is viewed that he is casting aspersions about match officials' fairness.

The FA is also looking into several flares being let off during the Capital One Cup semi-final at the Stadium of Light.

An FA spokesman told Press Association Sport: "We are looking into David Moyes' comments to the media following the match at Sunderland.

"We are also contacting both clubs to seek their observations in relation to the use of flares last night."