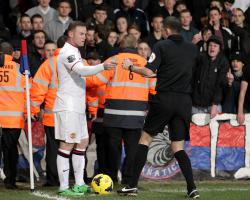 Rooney was targeted during Manchester United's match at Crystal Palace and drew the referee's attention to missiles being thrown at him.

It is also contacting Crystal Place to ask for their observations and speaking to the police in charge of security inside the ground.

Palace are unlikely to be charged unless the investigation decides the club was negligent - the main aim of the probe is to see if any of the people who threw coins or other items at the England striker can be identified from CCTV footage.

United defender Rio Ferdinand suffered a cut above the eye after being struck by a coin during a derby match at Manchester City in December 2012.

Police are still looking into Theo Walcott being targeted by missiles during the Arsenal's FA Cup third round victory against Tottenham last month.