Falcao future up in the air admits players agent 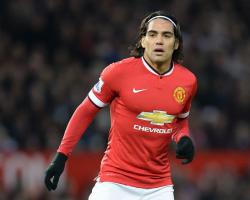 Falcao is on a season-long loan deal at United from Monaco which includes the option for the Barclays Premier League side to buy.

But there have been plenty of questions as to the likelihood of the Red Devils taking up that option, with the 28-year-old having only netted three times so far in an injury-affected campaign and being left out of the squad altogether for Sunday's 1-0 home loss to Southampton.

Reports have suggested Falcao was shocked by United boss Louis van Gaal's decision to omit him from the matchday 18, a call the manager confirmed was tactical.

Van Gaal did also stress after Sunday's game that Falcao had started the previous five fixtures and that the next match would be "another moment" in terms of selection.

Mendes, meanwhile, said of the Colombia frontman to Sky Italia: "He is a fantastic player, and I think it's very difficult for Manchester United fans.

"They have an absolutely brilliant player, one of the very best in the world, who would without any doubt play 90 minutes of the match, every time, with any other club.

"The truth is, right now we don't know what will happen.

"What we do know is that he will play in one of the very best clubs in the world next season, whether that is Manchester United or not.

But you know how football works, we need to wait a little