Falcao must prove worth - Van Gaal 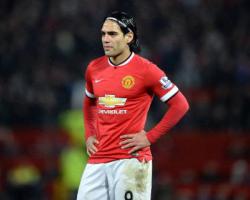 United beat a host of top clubs to the loan signing of Falcao on deadline day, but despite his reported wage packet of around ÃÂ£280,000 he has scored just three goals in 13 appearances.

To the bemusement of many fans, a fully-fit Falcao was left out of the match day squad for last week's 1-0 defeat against Southampton, with Van Gaal preferring to put 19-year-old James Wilson on the bench instead.

Van Gaal was unrepentant on the matter and insists the Colombian must prove he is up to the job if he is to get more game time and if United are to exercise their right to buy the striker for ÃÂ£43.5million.

"He has to prove himself, that we have agreed

We have made this deal and everything is clear and it is not the end of the year so he has the chance for that," the United boss said.

"You have to prove yourself

A player of ÃÂ£95million has to prove himself also."