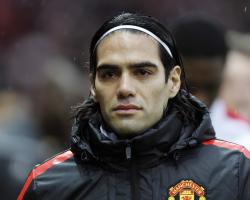 Falcao signed for United in a big-money season-long loan deal from Monaco on transfer deadline day in September, but has struggled to make an impact at Old Trafford, and was selected to turn out for the under-21 team against Tottenham last week.

But his former agent Silvano Espindola has told AS Colombia that Falcao did not understand the decision, and is deeply upset by the position he has found himself in.

We talk a lot and we cry together," Espindola said

"It's not an easy situation because every player wants to play and every goalscorer wants to score goals."

United manager Louis van Gaal has insisted the decision to select him for the under-21s was not a humiliating one for Falcao, but Espindola said the 29-year-old was clearly upset when he and the frontman spoke ahead the match, in which Falcao struggled and was replaced after 71 minutes

"When he was going to play this match with the youth team he called me," Espindola said

"We talked for 20 minutes while he was arriving at the stadium and he told me, 'I have never experienced anything like this, I don't know how to manage the situation

It was like this when he was injured in France, against a team from the fourth division."

Falcao missed much of last season and the World Cup with a knee ligament injury - the second of his career - but Espindola does not believe that is a factor in his Old Trafford struggles.

" The injury is forgotten," he said

"The main problem is the intensity of the game

He has to get this intensity back

The problem isn't fear of another injury, it's a lack of rhythm."

Falcao has scored only four goals in 21 appearances for United, but Espindola was critical of Van Gaal's handling of the player

"He is a coach that kills your confidence," Espindola said

He is working with other great players that were at a great level and with Van Gaal they are now less so."

United paid a reported ÃÂ£6million loan fee for Falcao, as well as covering his hefty wage, and must decide whether to take up a ÃÂ£43.5million option to make the deal permanent in the summer.