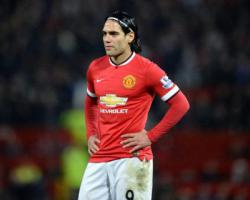 Having been an unused substitute in United's 2-1 FA Cup quarter-final defeat at home to Arsenal on Monday, the Colombia star was given a 72-minute run-out in the match at Old Trafford, which finished 1-1.

Falcao joined United from Monaco last September in a reported ÃÂ£6 million ($9 million, 8.5 million euros) loan deal with a view to a permanent ÃÂ£43.5 million transfer, but has found the net just four times in 20 appearances.

United manager Louis van Gaal has preferred Belgian midfielder Marouane Fellaini to Falcao in recent matches and offered an unconvincing defence of the former Porto and Atletico Madrid striker after the Arsenal defeat.

"He has scored four goals and has three or four assists, so that is his contribution," the Dutchman said

"He stimulates also the other players, so that is an aspect of the profession."