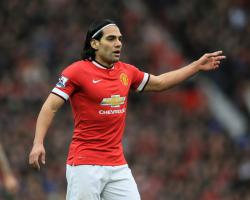 The 29-year-old has struggled to make the impact many expected of him at Old Trafford after joining on a season-long loan from Monaco, and whether he has a long-term future at United has been the source of much speculation.

However, Falcao, who suffered a cruciate knee ligament injury that ruled him out of last summer's World Cup, proved he has not lost his goalscoring touch after following up his brace in Colombia's 6-0 friendly win over Bahrain last week with another goal in Monday's 3-1 triumph over Kuwait

That lifted him on to 24 goals from 56 appearances, which leaves him one goal behind Arnoldo Iguaran in the all-time scoring charts.

He told Sport 360: "I think when I score it's always important and that gives me confidence

I said before I need minutes, I need to play games in a row and here in the national team I have had the opportunity

I gave my best and I scored and I now return to Manchester with more confidence."

Asked what his targets are for the remainder of the season, Falcao added: "We have the last eight games....I will give my best to have the chance to play as many minutes as possible

I have said before I need to play

I need minutes and I am confident about me, about my fitness

Falcao has scored just four times in 22 appearances for Louis van Gaal's side and United, who paid a reported ÃÂ£6million loan fee for the striker, must decide whether to take up a ÃÂ£43.5million option to make the deal permanent in the summer.

The former Atletico Madrid and Porto forward, who has been linked with a move to Juventus, was also asked if he expects to be with United next season

He said: "I have faith about that and when the season finish I am going to sit and think about my future and what is the best for my career."