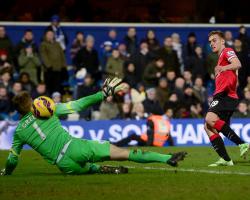 Marouane Fellaini came off the bench at half-time to score the opening goal of a poor-quality 2-0 win, with fellow substitute James Wilson wrapping things up with his first of the campaign with the last kick.

This was just United's third win away from Old Trafford in the Barclays Premier League this season as Louis van Gaal's expensively-assembled strike-force again flattered to deceive.

Having told Radamel Falcao he still needed to prove himself, the Monaco loanee missed the best two chances of the game before Fellaini spared his blushes - moving level with the Colombian on three goals for the season.

QPR had their own chances as Charlie Austin brought the best out of United goalkeeper David De Gea but Rangers remain 19th in the table and have now gone five league games without a win.

His counterpart did not have the most comfortable of afternoons in the away dugout and there were signs of the first grumblings of discontent from United's travelling contingent as a number implored Van Gaal to ditch his system and change to 4-4-2.

The introduction of Wilson on 57 minutes allowed the Dutchman to alter to a 4-4-2 with a diamond in midfield and, less than a minute later, Fellaini hammered them in front - and Van Gaal's name was once again being toasted by his fans - with Wilson adding the gloss deep into stoppage time.

Before that, everyone at Loftus Road had witnessed a first half was bereft of quality as both sides wasted possession and struggled to sustain any periods of sustained pressure.

Juan Mata, usually so assured on the ball, misplaced a pass to Bobby Zamora - who attempted an audacious effort to lift the ball over De Gea but could not hit the target.

Falcao had a golden opportunity to break the deadlock was played in by Mata and found himself free inside the area but shot straight at Robert Green before seeing his more difficult follow-up also kept out by the QPR goalkeeper.

If Falcao is low on confidence, his opposite number is at the other end of the scale and Austin had two great efforts in his attempt to put Redknapp's side in front.

His first chance came after Zamora had robbed Jonny Evans of the ball in the channel and fed in Austin, who shot was well saved by De Gea.

And the in-form Spain goalkeeper was on hand to again frustrate Austin, tipping over a sweetly-struck half-volley on the 30-minute mark.

Mata was withdrawn at the interval as Van Gaal as Fellaini replaced his more diminutive team-mate, while QPR were also forced into a change as Steven Caulker replaced Dunne at the back.

The second half started in much the same way and Leroy Fer was guilty of missing the best chance since the interval as he headed a Joey Barton free-kick wide when under little pressure.

Falcao came the close to breaking the deadlock as he peeled off the QPR defence to meet Antonio Valencia's deep cross but again Green was equal to his header.

But United did take the lead moments later as Rooney picked out Valencia, whose loose ball into the box was controlled by Fellaini before the Belgian lashed home.

Redknapp's men tried to react immediately but Fer struck a shot over De Gea's crossbar before Michael Carrick and the returning Marcos Rojo took each other out of the game going for the same ball - with QPR breaking forward en masse, but United's often questioned defence stood firm.

United broke forward and Wilson's cross looked destined to be tucked away by Falcao, only for Caulker to get a despairing touch on the ball and divert it clear of the waiting forward.

The same combination failed to double the Red Devils' advantage moments later, this time Falcao throwing himself at the young forward's cross but unable to connect.

QPR rallied at the death but Eduardo Vargas could not beat De Gea at his near post as United made sure of the win when Wilson finished at the second attempt, having been played in by Di Maria.